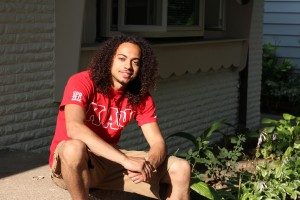 Bio: Outside of First Wave, Jonathan finds the proper balance between his academics, artistry, hobbies, fraternity and social life. While at UW, Jonathan has been President of Kappa Alpha Psi Fraternity, Incorporated, Vice-President of Order of Omega Greek Honor Society, a member of the 2012 & 2014 First Wave Touring Ensemble and an active community service member. His work has been seen on stages locally in Madison, Milwaukee & Chicago, nationally for the New York Knicks Poetry Slam as well as the headline group feature for national conferences in Boston, Anaheim, San Diego and Orlando. His artistic expression has also reached international levels in Manchester’s 2012 Contacting the World Festival and London’s “Cultural Olympiad, which preluded the 2012 London Olympics. Post-undergraduate, Williams intends to pursue a career in Acting and teaching in LA. Staying true to his goals of advancing himself and achieving in every field of human endeavor, he strives to take on life and Triumph.