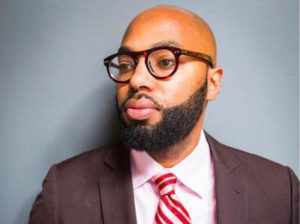 Dr. Christopher Emdin is an Associate Professor in the Department of Mathematics, Science and Technology at Teachers College, Columbia University; where he also serves as Director of Science Education at the Center for Health Equity and Urban Science Education. He is also the Associate Director of the Institute for Urban and Minority Education at Teachers College, Columbia University. He is an alumni fellow at the Hutchins Center at Harvard University, and currently serves as Minorities in Energy Ambassador for the U.S. Department of Energy and the STEAM Ambassador for the U.S. Department of State.

Dr. Emdin is a social critic, public intellectual and science advocate whose commentary on issues of race, culture, inequality and education have appeared in dozens of influential periodicals including the New York Times, Wall Street Journal, and Washington Post. Dr. Emdin holds a Ph.D in Urban Education with a concentration in Mathematics, Science, and Technology; Masters degrees in both Natural Sciences and Education Administration, and Bachelors degrees in Physical Anthropology, Biology, and Chemistry. He is the creator of the #HipHopEd social media movement, and a much sought-after public speaker on a number of topics that include hip-hop education, STEM education, politics, race, class, diversity, and youth empowerment. He is also an advisor to numerous international organizations, school districts, and schools where he delivers speeches, and holds workshops/ professional development sessions for students, teachers, policy makers, and other education stakeholders within the public and private sector. Dr. Emdin provides regular commentary on Al Jazeera and the Huffington Post; where he writes the Emdin 5 series. He is the author of the award winning book, Urban Science Education for the Hip-hop Generation and For White Folks Who Teach In the Hood and the Rest of Ya’ll Too, which is currently on the New York Times best sellers list.