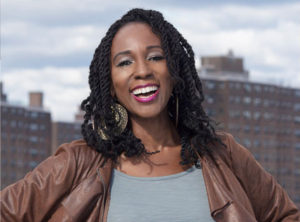 Writer and performer Toni Blackman is the first Hip Hop artist invited to work as a Cultural Ambassador with the US Department of State. Toni is creator of Freestyle Union and Rhyme like a Girl and was a 2012 DOVE Real Woman Honoree. She is currently a teaching artist at Carnegie Hall and recently performed for Lincoln Center.  This Echoing Green fellow was commissioned by the National Black Arts Festival for her Hip Hop theater piece “Wisdom of the Cypher”, featured in Forbes Magazine, on CENTRIC television and MSNBC’s Melissa Harris Perry Show, CBS morning news, MTV, VH1 and on the Tom Joyner Morning Show.

Toni speaks, teaches workshops, coaches in performance and public speaking and releases her new book Wisdom of the Cypher along with her hip hop meditation album this fall. Finally, she is a frequent presented at OMAI’s Hip Hop in the Heartland Educator’s Institutes.